Dozen of Round Bales Lost in Fire South of Syre 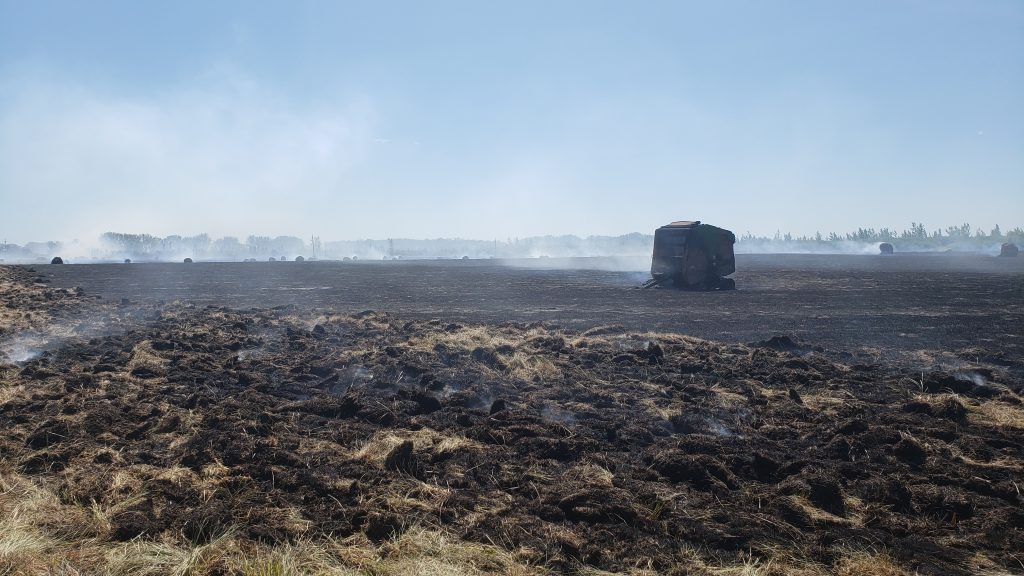 Syre, MN — Dozens of round bales were lost after a baler caught fire on Thursday morning between Twin Valley and Ulen. At approximately 11:40am, the Norman County Sheriff’s Office received a report of a fire in a CRP field to the west of Highway 32 one mile south of Syre. According to Norman County Sheriff Jeremy Thornton, a farmer was baling round bales when his baler started on fire. With gusty winds and extremely dry conditions, the fire spread out of control in a matter of minutes, burning the remaining grass and dozens round bales in its bath. Fire crews from Twin Valley, Ulen, Gary, Ada, Borup, and the Minnesota DNR all rushed to the scene. Quick thinking from a nearby farmer may have helped save some adjacent state wildlife land, according to Thornton.

To the west of the fire was approximately 5,000 acres of state wildlife management area that were luckily not impacted.

The farmer who was baling the land estimated that approximately 65 round bales were burnt up in the blaze. Given the drought and shortage of bales, he felt they were much more valuable than the baler itself. He was able to unhook his tractor just in time to avoid losing that as well. Sheriff Thornton reminds anyone else who may be in the fields to be extra cautious and make sure your equipment is in good working order.

No one was injured in the incident. Fire crews were able to stop the blaze from spreading across Highway 32 and get it under control in about an hour.