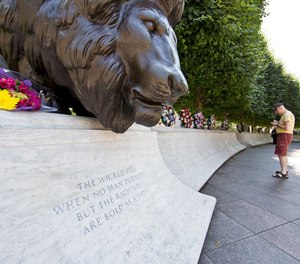 Fosston, MN — This week is National Police Week, a collaborative effort of many organizations to honor America’s law enforcement community, but as part of that we also recognize this Sunday as National Peace Officers Memorial Day. In 1962, President John F Kennedy proclaimed May 15th as National Peace Officers Memorial Day as a special recognition to those law enforcement officers who have lost their lives in the line of duty for the safety and protection of others. Polk County Sheriff’s Deputy Mike Norland says there will be special ceremonies both locally and nationally to pay tribute to our fallen officers.

Names from Minnesota that will be added to the Law Enforcement Memorial Wall this year include Charlie Banks Jr from the Deerwood Police, Ronald Smith from the New York Mills Police, and Sarah Ann Grell from the Minnesota DNR. Cody Holte, Norman County native and Grand Forks Police Officer was added to the wall last year. Mahnomen County Sheriff Deputy Chris Dewey was shot and killed in the line of duty during a traffic stop in February of 2009.