Spears, Beers, and Decoy Show Returns to Lean To Tavern in Bejou this Saturday 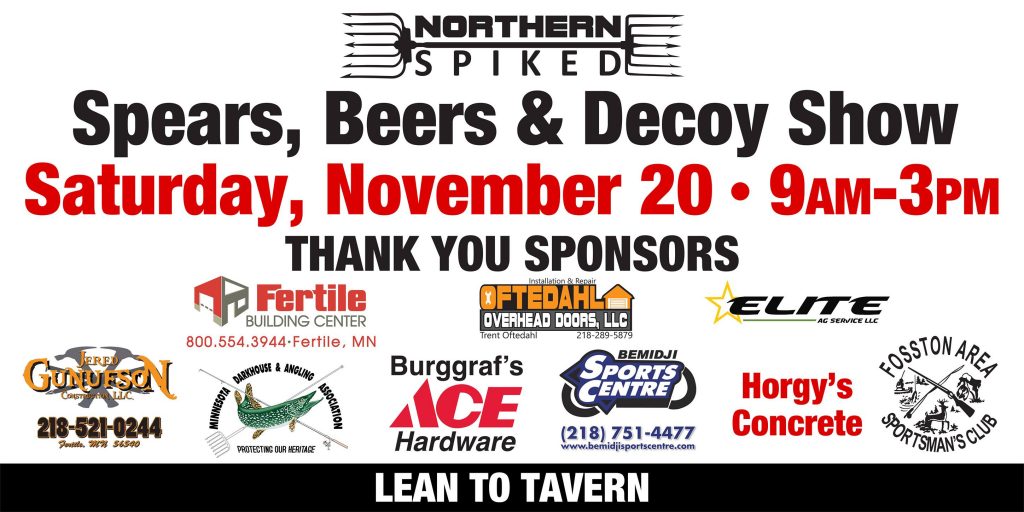 Bejou, MN — The Spears, Beers, & Decoy Show returns to the Lean to Tavern in Bejou this Saturday, November 20th. Hosted by the Northern Spiked Darkhouse Spearing group, this event will offer spear fisherman a chance to browse and shop from a number of different vendors focused specifically on the unique form of ice fishing. Jordan Gunnafson of Northern Spiked Darkhouse Spearing says up until they started this event a couple of years ago, there wasn’t any shows like this in the area for people to check out the latest and greatest in spearfishing.

There will be roughly a couple dozen different vendors selling goods specific to spearfishing, including decoys, saws, and spears, and Gunnafson says most of them are based out of this local area.

Also part of the Spears, Beers, and Decoy Show will be a number of giveaways and raffles. Your entry fee into the event, which is just $2 for adults and free for age 16 and under, enters you for a chance to win door prizes.  Gunnafson says they are also selling raffle tickets for an aluminum dark house.

The Spears, Beers, and Decoy Show runs from 9am until 3pm at Lean to Tavern in Bejou this Saturday, November 20th. There will also be a live auction following the show, as well as live music from Generation Gap that evening.  While there won’t be a meal served, guests are encouraged to grab food from either of the two bars in town. Follow Northern Spiked Darkhouse fishing on Facebook for more information.