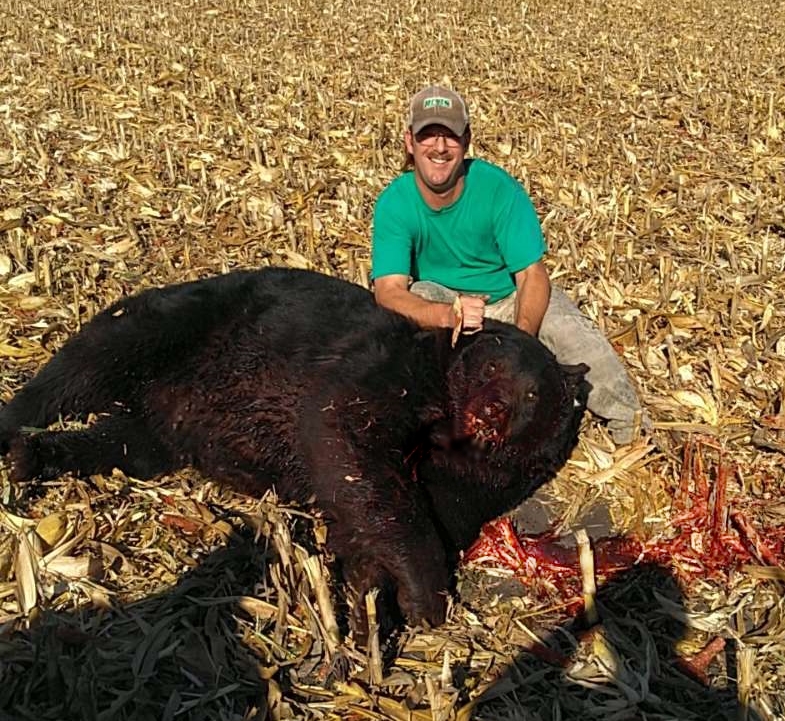 Lockhart, MN — A Twin Valley sportsman bagged a bear of lifetime last week right here in Norman County, a bear that could potentially be one of the largest ever shot in the state of Minnesota. Still looking to fill his tag with just over a week left in the bear season, Chris Lee was lucky to get a tip that a bear had been pushed out of corn field that was being harvested north of Ada near Lockhart. He waited for the bear to return to the field later that day, but even after it reappeared, Lee still had no idea just how big of a bear it was.

Chris was armed with 6.5 Creedmoor rifle, which he notes in retrospect might have been a little underpowered for a bear of this size. Then again, he never expected a 700 plus pound bear to walk out of the woods either. Lee said it took a handful of shots to take down the mammoth male bear.

It wasn’t until Chris got close to the bear and tried to move it that it finally started to sink in just how big it was. Field dressed the bear weighed in at 610 pounds and is estimated to have been around 720 pounds live weight. Luckily, Lee had a few friends around to help load the animal up.

The black bear harvested by Lee is double the size of the next largest bear he’s ever shot in his more than 10 years of bear hunting. For comparison’s sake, he indicated that most bears weigh between 150 and 200 pounds. Whether or not Lee’s bear is a state record remains to be seen. Bears are scored by their skull measurements and not weight. However, the heaviest hunter taken bear on record is 687 pounds live weight, but the DNR has reported that 800-pound bears have been live trapped as well. In 2017, a Roseau hunter shot a 602 pound field dressed black bear that may have been the largest ever bear taken by hunter at that point, but like Lee they didn’t use a certified scale.

Chris is currently getting the bear’s skull measured and aged. He estimates it to be around 8-10 years of age or even older. He hopes to have bear mounted.